The PLO considers Israel’s existence one of its historic compromises – except it hasn’t compromised an inch.

“PLO leader Mahmoud Abbas’s dismissive response to President Trump’s peace plan spells the end of the road for the PLO as Israel’s Arab partner to negotiate an end to the 100 years unresolved conflict between Jews and Arabs.”

David Singer is an Australian lawyer who is active in Zionist community organizations in that country. He founded the “Jordan is Palestine” Committee in 1979.

More from the author ►

PLO leader Mahmoud Abbas’s dismissive response to President Trump’s peace plan spells the end of the road for the PLO as Israel’s Arab partner to negotiate an end to the 100 years unresolved conflict between Jews and Arabs.

The PLO will maintain its long-standing rejectionist policy of not recognising Israel as the Jewish State after Abbas panned the Trump plan in the following denigrating and unequivocal terms:

“They told me Trump wants to send me the deal of the century to read, I said I would not,” Abbas told the meeting of Arab League foreign ministers.

“Trump asked that I speak to him over the phone, so I said ‘no’, and that he wants to send me a letter, so I refused to receive it.”

Holding up a map that shows the gradual geographic reduction of Palestine through four stages from pre-1948 to Trump’s Middle East plan, Abbas said: “I challenge any of you, if you can even see us on the map. If you ask a child in first grade to draw Trump’s map he will never know how to.”

“This is a disgrace,” he added.

Abbas also said that he will cut security ties with both Israel and the US: “We’ve informed the Israeli side … that there will be no relations at all with them and the United States, including security ties,” he said.”

Abbas has lost the plot.

The map Abbas held up (click link) – was totally false and misleading – even its title is a total lie – but it also comprises only 23% – not 100% of Historic Palestine, which, of course, had nothing to do with the Arabs who call themselves “Palestinians” today, but was named by the Romans half a millenium before the Arabs came to the area.

Abbas’s map excluded Transjordan – 77% of the land in the League of Nations 1922 Mandate for Palestine. Transjordan was closed to Jews who had been allotted it as part of the land on which to reconstitute the Jewish National Home there under article 25 of the Mandate – thus reserving this 77% of Palestine for the Arab residents of Palestine.

Transjordan remained part of the Mandate until it was granted independence by Great Britain in 1946.

A textbook containing a similar map was trashed by Publisher Mc Graw Hill in 2016. 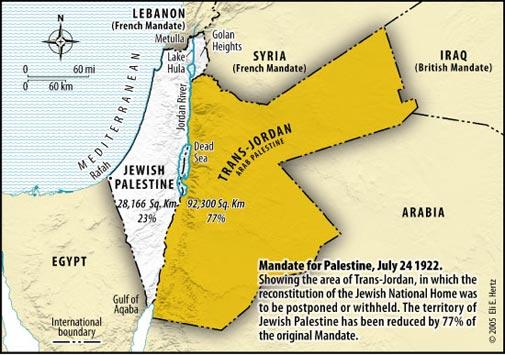 Jordan and Israel are the two successor States to the Mandate for Palestine – currently exercising sovereignty in 95% of former Palestine. Sovereignty in the remaining 5% – Judea and Samaria (‘West Bank’) and Gaza – remains undetermined.

The PLO refusal to negotiate with Israel on the Trump plan – will have the following results:

Jordan should now replace the PLO in negotiations with Israel on Trump’s plan because:

The areas designated for A Future State of Palestine in the Trump Plan (pictured below) now become possible areas for transfer to Jordanian sovereignty in negotiations with Israel. 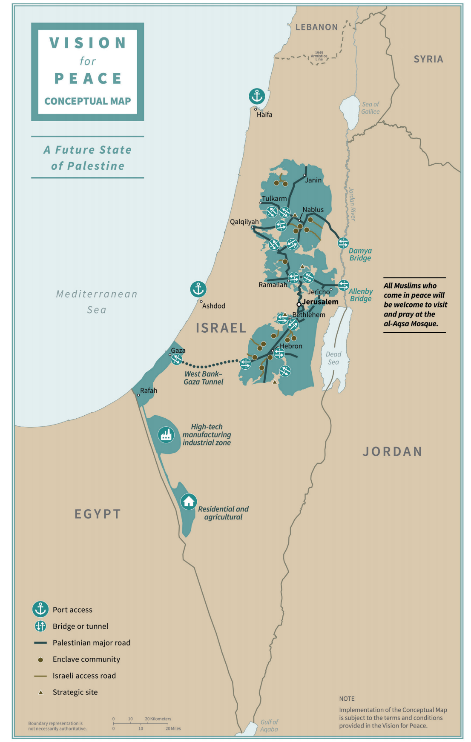 Successful Israel-Jordan negotiations would be a real game changer – holding out great prospects that the long-running Jewish-Arab conflict could finally be achieved.

Failure by Jordan to negotiate with Israel could see Israel extend its sovereignty to all of Area C in the ‘West Bank’.

President Trump needs to phone King Abdullah of Jordan and persuade him to embrace Trump’s “deal of the century”. The PLO has blown its chance to do so.